Michiel de Ruyter, born in Vlissingen was a Dutch Admiral known worldwide for his most famous
exploit: sailing into England and coming home with the English Royal flagship.

In his early days, he worked for a Dutch company in Dublin. His talent on the waves was quickly
revealed and he rose through the ranks. His career was extremely varied and worth looking into.
It was in commanding ships that his talent came to the fore and he fended off pirates so
successfully that some didn’t bother with him anymore.

The Netherlands was having trouble with the neighbours who were in the habit of interfering with
Dutch shipping and that meant war. In wars with the English and the French, he took action as far
away as St. John’s, Newfoundland and The West Indies.

Michiel de Ruyter lived from 1607 to 1676. In the action often known as the raid on the Medway
he sailed up the Thames burning the British fleet along the way and returning home with the British
royal flagship. The humiliating defeat for England resulted a quick peace treaty. Tensions continued to simmer and erupted again when France and England allied to take The
Netherlands. Michiel de Ruyter never had much time to retire and enjoy the wealth he
accumulated as a trader as the country kept needing him to save them from being annihilated by
their various enemies at different times: Portugal, Spain, France, England…

Again and again, de Ruyter was called into service to save the fledgling country of The
Netherlands. He was a formidable foe. It would be very interesting to lay out some of the tactics
that gave him victory over pirates and the proudest navy in the world – but they seem to be buried
in books except for the raid on the Medway. This great story is easily found.

Guts and glory, he had it all, and a heart so big his men loved him and called him “Grandfather”.
He wasn’t exactly itching for fame. He refused command of the Dutch fleet! I suspect he would
have preferred a peaceful life but he happened to be so good at what he did he kept having to
work for the government anyway.

Less well known about him is that there is a monument in his honour in the city centre of
Debrecen, Hungary, for freeing 26 Hungarian Protestants from slavery at his own expense.

When De Ruyter was mortally wounded in a battle with the French near Syracuse, the French
stopped their attack and, on orders of King Louis XIV, they fired a salute as the Dutch ships
returned to The Netherlands.

If you would like to see some of his history on your travels, you can begin with Amsterdam or visit
the city of his birth.

His grave is in the Nieuwekerk in Amsterdam at Dam 12 next to the palace and his home in
Amsterdam at the time of his death was Prins Hendrikkade 131.

For his victory against the English, de Ruyter was awarded a golden goblet which can be seen at
the Rijksmuseum in Amsterdam as well as the stern ornament panel from the ship. These are
also pictured on the museum website.

His story lives on in a Rudyard Kipling poem mentioning de Ruyter: The Dutch in The Medway,
which also sheds light on the political climate.

A movie about him is well worth watching. The Dutch version titled ‘Michiel de Ruyter’ was
released in 2015 and the English version titled ‘Admiral‘ came out in 2016. The movie tried
relatively hard to be faithful to history. According to Rotten Tomatoes, the audience liked ‘Admiral’
far more than the critics. 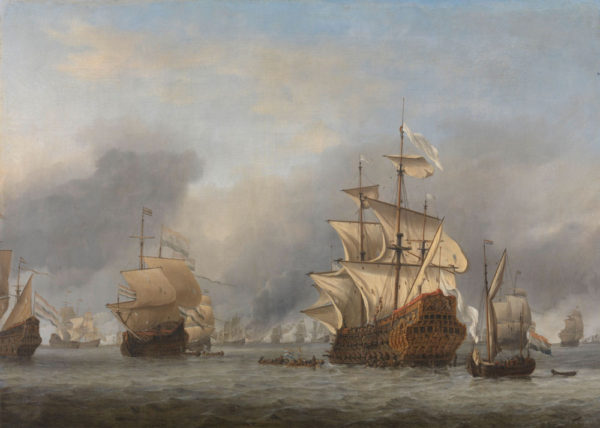 This articles was written by Margaret Metsala for publication on the Connect International website.
Published on: January 12, 2017June 22, 2019
Posted under: Culture